Laundry detergent takes many forms, but traditional liquid detergent and pods are the two most widely purchased. You might be thinking, “Aren’t pods just an easier, less messy alternative to liquid detergent?” While quite a few of you might be under a similar impression, the differences between liquid and pod detergents are a little more nuanced. First, let’s briefly go over what these detergents are, then dive into what makes them distinct from each other.

Liquid laundry detergent is typically packaged in a carton capped with a lid that serves a secondary purpose as a measuring cup. Heavy-duty laundry detergent made its debut on home goods shelves in the post-war 1950s and quickly became a competitor with bleach and soap, but waste from these products was a consistent concern. By the 1990s, liquid detergent was widely available as a dissolvable, waste-free iteration. 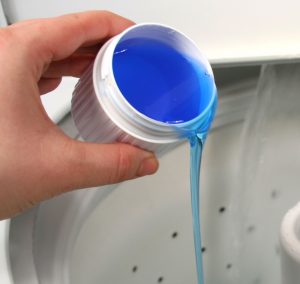 Pods are the most recent iteration of laundry detergent.  They are a quick and dissolvable detergent option. Dissolvable pods were created as part of an effort to reduce waste and overuse of standard detergent. 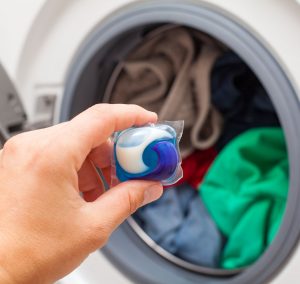 What Makes Each One Unique?

Now that we have a little background knowledge about detergents and pods let’s explore how these two detergent options are unique from each other.

Liquid and pod laundry detergents share many of the same major ingredients. These ingredients include alkalis, surfactants, perfumes, catalytic enzymes, and optical brighteners. Two ingredients that set pods apart from liquids are polyvinyl alcohol and denatonium benzoate. The first one separates components of the detergent that would otherwise neutralize each other if they made contact prior to being added to the wash. The second ingredient adds a bitter taste to discourage children from attempting to consume pods due to the packaging of some pods having a candy-like appearance.

Liquid and pod detergents come with their own unique strengths. Liquid laundry detergent is already dissolved, which reduces the chances of residue, comes with a measuring cap, and is effective for spot treating, especially with oil and grease stains. This detergent can also be used for handwashing in addition to traditional machine washing of garments.

Pod detergent comes premeasured, which already eliminates one step of the washing process. The way the substances within the pods are packaged allows for a more effective reaction when they come together during the wash cycle after the packaging dissolves. Additionally, pods are less messy and don’t take up as much space as other forms of detergent.

The costliness of pod and liquid laundry detergents depends on the frequency of their respective use, but pods are often considered the pricier of the two. Depending on the brand and the container size, liquid detergent can be as cheap as $7 or as expensive as $55. The price will also depend on whether you make an in-person or online purchase. Pod detergent boxes will range anywhere in price from $5 to $30, but the frequency of use can make pods the more costly of the two options. Ultimately, costliness depends on the preferences of the consumer and which detergent they are most partial to using.

Which One Is Best For You

Finding the laundry detergent that’s best for you is a matter of personal preference. Do you prefer the efficiency of pods or the reliability of liquids? Is saving money or utility your overall concern? If you find that you are still unsure, contact us so a professional can provide insight.